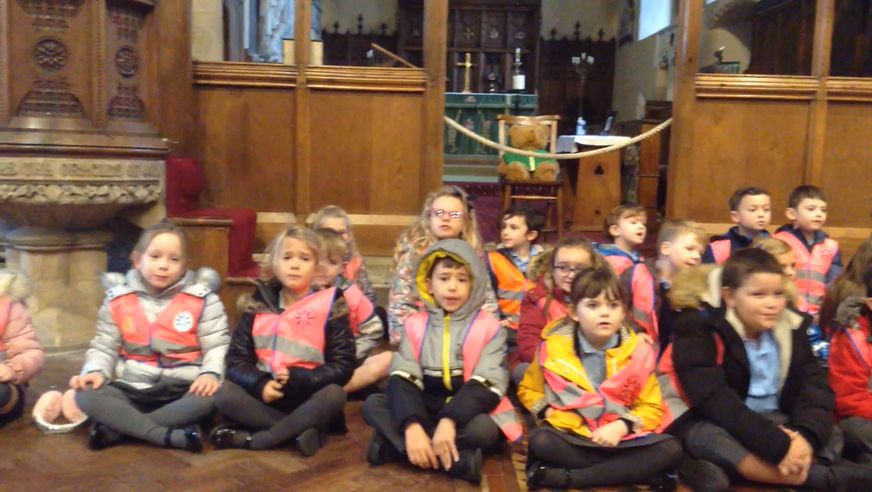 The children in year 2 loved singing 'Cauliflowers Fluffy' at our local church for Harvest Festival.

Thank you to all who helped the children to learn their lines and came to support the children during their performance. I am sure you will agree that the children produced a fantastic assembly! With only the day of the performance to practise using a microphone, we are very proud of how they performed their lines (there were a few nerves beforehand). We would also like to thank everyone again for donating food to the local Foodbank, we know it is going to a great cause. Thank you also to St Andrew's for hosting. We loved every minute, including the very wet walk home!

As part of their 'traditional tales' literacy unit, the children in year 2 have been producing work based on the story 'Hansel and Gretel'. They continued our work in Forest School this week by retelling the story and role playing the characters.  The children got into small groups, made gingerbread houses and got into character. Can you tell who they are supposed to be? Miss Dunlin was very impressed with the detail in their houses! Super imagination Year 2!

They only needed their imagination for so long as the children were able to enjoy a real gingerbread biscuit and hot chocolate, yum!

Later in day, the children made a clay pot based on a design they had created last week. The children were able to manipulate the material into their desired shape as well as using tools to add finer details. Let's hope these pots hold the marvellous mixtures they invented in their poetry unit!

The children in Year 2 had a very busy day at Forest School! We began by learning how to be safe around the fire as well as learning the 'respect' position when kneeling around the pit. This helped them when they began to use flints to help start the fire. This was a team effort and the children showed lots of resilience when trying to make a spark. Once the fire was roaring away, the children were able to toast marshmallows and make smores as a reward. Lots of happy children! During the afternoon, the children went foraging for different materials that they could use to make a pattern/simple picture. Luckily there were lots of natural materials to do this. After, they went to make our own special mixtures and potions in the herb garden. They used their senses and imagination to create some wonderful mixtures. They all smelt amazing, particularly the sleeping potions which contained lots of lavender!

The children in year 2 had a visit from Labrascals this week and it was so much fun! They looked at a range of ingredients and just like George (from George's Marvellous Medicine), they mixed them together to make some explosive and colourful concoctions! Luckily, Miss Dunlin did not zoom through the ceiling like Grandma! The classroom however did get very messy as did some of the children! Their favourite part of the morning was making slime and in order to take it home, the children had to describe their mixture using 3 adjectives. Thankfully, everyone succeeded!

If any parents are interested, Labrascals are running some workshops in the half term at various locations including Barton. They also run birthday parties! The kids loved every minute...as did the adults! Here is the link for more information...

Year 2 had a brilliant time in Forest School today! The children learnt how to make the dish, 'apple crumble'. They began by carefully peeling the apples and cut them safely using the bridge grip. Once all the apples were prepared, they were transferred to a cooking pot where they were stewed. The children carefully measured ingredients to make a crumble for the top and got a little bit messy mixing the ingredients. Whilst the apple crumble was baking, the children had their lunch.

After lunch, the children worked in teams to create a den. They demonstrated excellent communication skills and had super imaginative ideas to make their dens more exciting. As a reward, the children were able to eat the dish they had created in the morning in their carefully constructed dens. They even washed and dried up! Well done children!

'Thank you Ma'am, for everything'

This week, the children in Year 2 spent some time thinking about the Queen and what she meant to us. We talked about things that will always remind us of her, most of the children thought of Corgi dogs. With this in mind, the children carefully followed instructions of how to draw one. The results were terrific!

We also thought about the feelings of others and how the Royal Family must be feeling at this sad time. We shared ideas on how we can make others feel happier and decided that we would send, His Royal Highness, The King, cards to show that we are thinking of him. The children took lots of care to make these and were very excited to hear that Miss Dunlin would actually send them to Buckingham Palace!

The children in Year 2 were very excited to be the first into the Forest School this year! Thankfully, the weather was kind to them and stayed dry for much of the day. They began with a very important safety talk and walk around the area to refamiliarise themselves with the learning areas including the bird hide, pond, fire pit and story telling area. The children also recapped how to lift wood safely and practised by making dens in small groups.

During the afternoon, the children were able to conduct a simple experiment to see what happens when soil is mixed with water. They had lots of fun manipulating the mixture and discussing what happened when more water was added. Luckily, their topic includes 'muck' and 'mess' because it got very messy!

Finally, we were shown how to care for the chickens. All their hard work was certainly worth it as they were rewarded with 6 eggs.

Lots more to look forward to next week!

The children in year 2 have had a great first week back and enjoyed getting stuck into our new topic, 'Muck, Mess and Mixtures'. Within our literacy unit, we have been looking at different ingredients and thinking about which adjectives best describe them. The children came up with some brilliant vocabulary as a group and learnt how to write expanded noun phrases independently.

Unfortunately not the ones with chocolate chips.

Some cookies are necessary in order to make this website function correctly. These are set by default and whilst you can block or delete them by changing your browser settings, some functionality such as being able to log in to the website will not work if you do this. The necessary cookies set on this website are as follows:

Cookies that are not necessary to make the website work, but which enable additional functionality, can also be set. By default these cookies are disabled, but you can choose to enable them below: